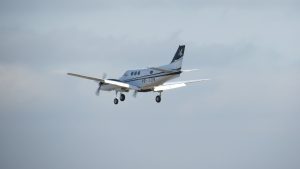 Two people are lucky to be alive following a plane crash near the Earlton-Temiskaming Regional Airport Saturday night.

OPP and emergency crew responded to a call about 8:45, and discovered the plane crash in a field near the airport.

The pilot said the plane lost power and he had to put it down.

The pilot was not injured while a passenger suffered minor injuries.