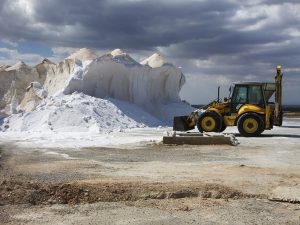 There is no doubt the twenty city workers in Temiskaming Shores have been working overtime, and then some to try and catch up with the record amount of snow that has buried the region.

Roughly 2 and a half times what we are used to.

But it gets a lot tougher when you run out of supplies.

Hard to salt the roads when salt runs out.

Doug Walsh is the Director of Public Works. “There was a strike down in Goderich at the salt mines this past Summer, the work disruption went on for about 6 months so my understanding is a lot of the salt has been brought into the docks in Parry Sound has actually originated in South America.

Those mines down in Goderich are back up and working, but those suppliers were forced to bring in product from South America in anticipation of a shortage.”

He says the province always has first dibs on the salt that does come in to keep the 400 series open.

Add in the fact the highways are closed down and the salt can’t get through.