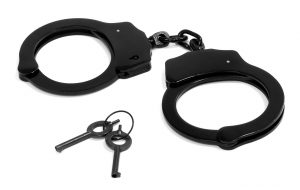 Temiskaming OPP officers responded to a break in call Sunday night and were allegedly assaulted by the suspect.

They received a call about a break in in progress at a building on 4th street in Englehart.

They arrived and the suspect fled on foot.

They chased him down and made an arrest.

21 year old Mathieu Lapierre of Evanturel Township was charged with 2 counts uttering threats cause death, assaulting a peace officer and causing a disturbance.

He will appear in court August 27th.