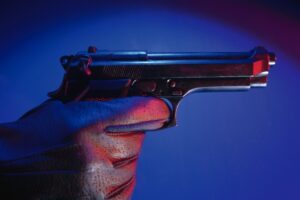 North bay police are searching for a suspect after a woman was robbed at gunpoint in her own apartment Wednesday evening.

She let the woman in thinking she was a personal support worker.

The woman pulled a gun in her and demanded her purse and medications.

She took them and left.

The woman is described as a little over 5 feet tall with a slim build, and blond hair which was in a bun at that time.