Drug charges have been laid against a pair of local residents. 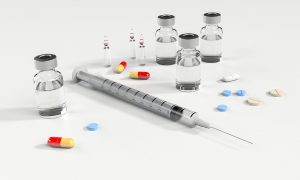 According to Temiskaming OPP, a vehicle was pulled over Thursday evening and both the driver and passenger were allegedly found carrying hydromorphone, crystal meth, oxycodone, and fentanyl.

A 23-year-old woman and 24-year-old man are both facing trafficking charges and other offences.

They’ll be back in court at the end of October.