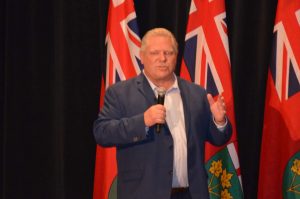 What do you get a party for a one year anniversary?

As in cabinet shuffle and a few won’t like what the premier got them.

Premier Doug Ford shuffled his cabinet in a big way Thursday dropping some high profile ministers down a few notches.

Nipissing MPP Vic Fedeli has been moved out as Ontario Treasurer replaced by Rod Phillips.

Caroline Mulroney is no longer Attorney general but the Minister of Transportation and Francophone Affairs while Doug Downey is the new A. G.

Lisa McLeod is out as Children and Community Social Services Minister and moves to Tourism while Lisa Thompson loses the Education portfolio and gets Government and Consumer Services.

It was rumored Fedeli would take over a new ministry just for Northern Ontario, but has taken some big hits since bringing in his budget earlier this year.