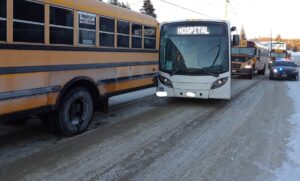 A collision between 2 buses has led to charges in Cobalt.

Temiskaming OPP responded to a call about an accident involving a school bus, and a transit bus on January 20th.

It happened on Lang Street about 4 pm.

There were passengers on both buses at the time, a school bus passenger sustained minor injuries.

The driver if the transit bus, a Temiskaming Shores resident was charged under the highway safety act.