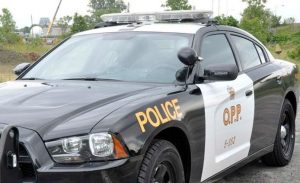 An accident involving a pick up truck and a farm tractor has led to an impaired charge.

The accident took place on highway 101 in Taylor Twp.

South Porcupine OPP investigated and 3 people were taken to the hospital with non life threatening injuries.

The driver of the pickup failed a standard field sobriety test and was arrested 38 year old Michael Dzsambic of Swastika was charged with operation while impaired alcohol and drugs.

He will appear in court in Timmins August 20th.